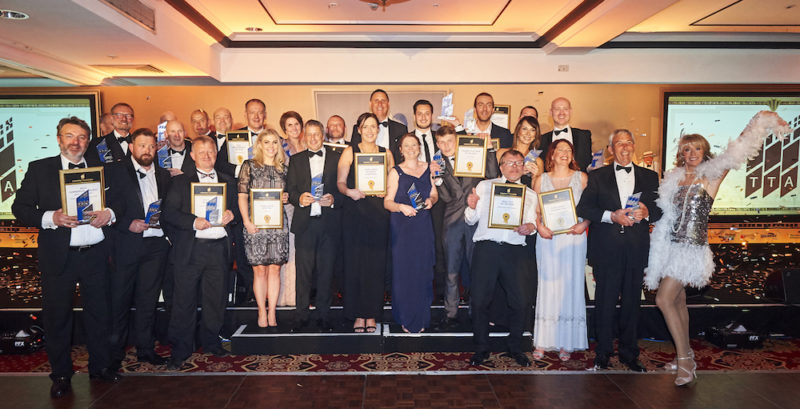 The TTA Awards are always highly competitive, and this year was no exception. The TTA congratulates all those companies and individuals who won Awards, showing the very best that our industry can achieve.

This year saw the introduction of two exciting innovations for the Awards Day. The first was The Tile Association Tiling Show.

According to research carried out by the TTA, most exhibitors at the TTA Tiling Show achieved good sales leads from the event and would definitely intend to exhibit again. The majority of the 30 exhibitors found that the type of visitors who attended were highly relevant to their businesses and almost all exhibitors surveyed said they were likely or very likely to exhibit again if the event was run again in the future.

This positive response was mirrored by a survey of visitors, which found that the majority would be happy to recommend attendance at the Show to their colleagues in future, and 75% of those interviewed would be likely or very likely to attend if the Show was held again. Visitors particularly valued the opportunity the Show provided to find out about new products and also to establish contact with new trading partners.

It is now hoped to develop the Show into a regular fixture of the Awards in the future.

The second innovation was the programme of CPD presentations which also took place during the day. Seven of our Gold Award Sponsors made presentations, which were well-received by those in attendance. It is also hoped to develop this further in the future.

As TTA chairman Paul Luff reflected after the event: “There are always a lot of people to thank after an event like this. But I would just like to single out a few people, without whom these Awards would not be possible. The first are our sponsors. There were a record number of them this year. I think this reflects firstly the strength of our industry and also the value that our member companies increasingly put on these Awards, as a barometer of excellence and best practice that we should be proud of. The Gold sponsors this year were BAL, British Ceramic Tile, UltraTileFix, N&C Nicobond, Norcros Adhesives, Shackerley (Holdings) Group Ltd, Tilemaster, Trimline, Walls and Floors. Our Silver sponsors, to whom we are equally grateful, were CITB, Lithofin and Local Heroes. One of the most gratifying features this year has been the number of new names taking part in the Awards, either as sponsors or entrants. This also reflects the vibrancy of our industry and indeed of the TTA itself.”

The evening was once again professionally and engagingly hosted by Emma Jesson.

Employee of the Year – Peter Oates

Articles featuring individual Award winners will be featured in future issues of Tilezine and other media.