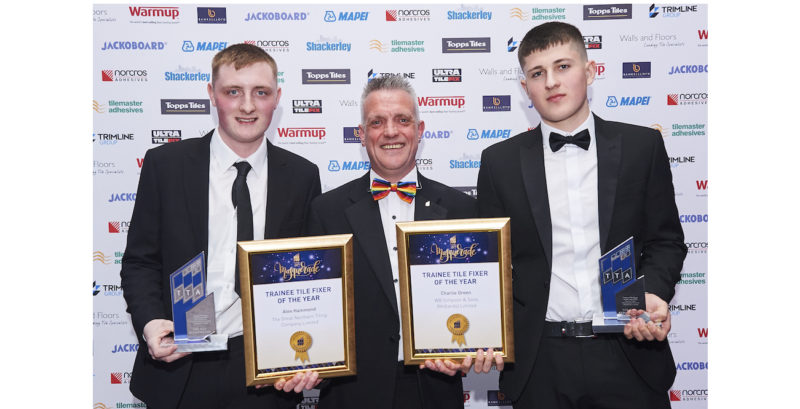 Alex Hammond began his role as an apprentice tiler at The Great Northern Tiling Company Ltd immediately after leaving school in 2017, and has already developed significantly in his ability. He has relished the opportunity to learn from his highly-skilled colleagues and has exceeded expectations in all training provided. Alex is also currently working towards gaining an NVQ Level 2 in Wall and Floor Tiling at Sheffield City College, demonstrating his clear passion for the trade and willingness to learn.

Over the past year, Alex has contributed tremendously towards some highly prestigious commercial contracts, including a current project at the Mercedes-Benz car showroom in Erdington, as well as previous works at the Mayfield Pool Leisure Centre in Dagenham, the DoubleTree by Hilton Hotel & Spa in Chester and several F1 Autocentres across the country, to name just a few. His excellent work throughout these projects has evidenced how he has very quickly become a skilful young tiler, and is already an integral part of the team.

Charlie Green joined W B Simpson & Sons (Midlands) Limited in 2016 as an apprentice, after completing his GCSEs at Ashlawn School, Rugby. He has been studying Wall and Floor Tiling at Moulton College, Northampton, successfully achieving an NVQ Level 2. He very quickly established himself as a keen, adaptable learner and is now honing his skills as a tile fixer.

Charlie has represented W B Simpson & Sons on various projects, particularly the HSBC new Retail and Commercial Bank HQ in the heart of Birmingham. This 11-storey building is the first to be constructed to LEED (Leadership in Environmental and Energy Design) in Birmingham. It is one of the greenest buildings in Birmingham and the first to receive Gold Accreditation, something Charlie will no doubt look back on as an honour to have been involved with.

The two Trainee Tile Fixer of the Year winners also received prizes donated by Aquacut. Alex and Charlie both won Topline Pro 720 tile cutters. These are the best tile cutters on the market, manufactured to high standards for use by professionals and retailing at over £300 each (inc VAT). Congratulations again to our two winners.