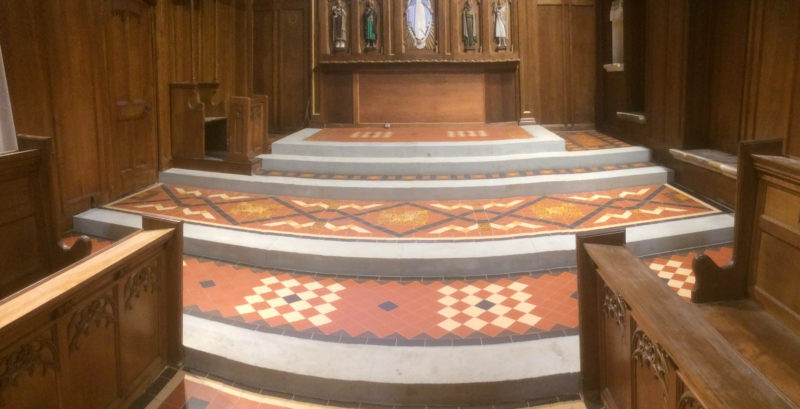 Pontcanna (Victorian) Tiling & Restoration of Cardiff have had their expertise in heritage tiling recognised at the TTA Awards, where they won the top Award for Best Heritage Project. The company has worked on many heritage projects, a sector in which it has established a reputation extending far beyond its local area. The TTA Award relates to the company’s work on the Chancel and Altar of St Dingat’s Church in New Tredegar, 20 miles North of Cardiff. This has been a renowned conservation project, and Pontcanna was called in by the main conservation company Taliesin Conservation Ltd to provides specialist assistance on the tiling elements of the job.

Pontcanna were asked to put together a plan for restoring the geometric floors in the church, which comprises a chancel and single-aisled navel under a continuous ridge, built in 1892/3 to designs of Seddon & Carter, with the south aisle added by them in 1899. The Six levels of the Altar and Chancel comprised 229 Ruabon glazed encaustic 4in and 3in square tiles in six different patterns. The base on which they and 3,000 plain tiles were originally laid, had been eroded by salts after being buried beneath carpet for decades.

Although the intention of the project was to restore the floors to their original design, the cost of replacing the encaustic tiles would have been prohibitive, so Pontcanna’s plan was to salvage and remachine all the tiles on an individual basis, a painstaking process, requiring great patience to avoid the tiles blistering. Despite the poor base quality and the fact that many of the tiles had become stuck to the neighbouring ones, they salvaged 99 per cent intact.

The whole project was delivered seven days ahead of schedule to a vastly reduced budget and to an extremely high quality. This enabled the conservation contractors to complete their programme of works and to hand the Church back in time for its festivity calendar.

Kevin Fisher and Matthew Lovibond, directors of Pontcanna, travelled to the TTA Awards night in Solihull to collect their Award. After the presentations, Kevin Fisher said: “It was great to be able to fly the flag for Wales at these Awards, and also to achieve recognition for the work that we have carried out in the heritage conservation field in the last few years. Since the centre of Cardiff is a conservation area, we expect there to be increasing demand for this sort of work, so it is great to get a profile for the St Dingat’s Church project, a job that we are very proud of.”

Pontcanna’s other work has included a large number of commercial and domestic projects in and around Cardiff, and also the rest of the UK and even the occasional job overseas.