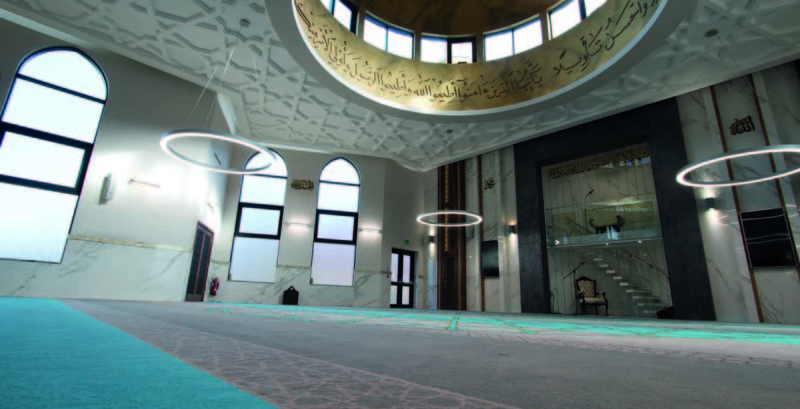 A stunning Roccia tile installation, at Preston’s landmark Masjid e Salaam Mosque, has been completed using a Tilemaster fixing system. Part of a £3 million redevelopment, the ‘blueprint’ installation was carried out by multiple tiling teams recommended by Roccia. It features Roccia porcelain surfaces, in 6mm and 12mm large formats, installed over wall and floor heating through the building’s magnificent interior.

Originally the site of two Victoria houses, the new Mosque opened to the community after almost a decade in planning and four years’ construction.   Prominent member, Amjad Patel and brother Zabir – the latter being the founder of Tile Mart, which has been rebranded Roccia – were heavily involved in the design aspect. Below the towering dome and minaret, the contemporary tiled surfaces form an integral part of the stunning interior design, which has become a blueprint for other mosques throughout the UK. The Pro-Tilers’ installation was led by director and founder, Steve Wagstaff. It included ablution rooms, the mosque’s central atrium, prayer rooms and corridors.

Tilemaster’s specification included Standard Set Setaflex and Light Weight Standard adhesives, which were used to fix all surfaces. As well as providing flexibility, extended pot life and eco-benefits, the systems are ideal for use with wall and underfloor heating systems.