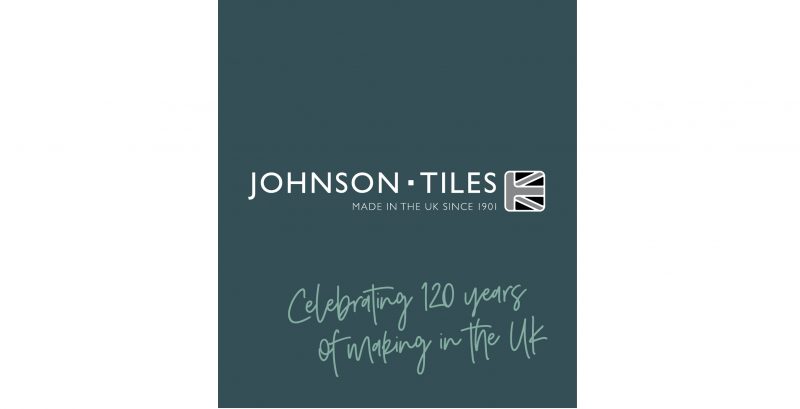 Johnson Tiles is marking 120 years of manufacturing in the UK.

Established in 1901, the company is now the only ceramic tile manufacturer of its scale and is using its big birthday to celebrate ‘British resourcefulness’. To kickstart the milestone year, the brand has unveiled an updated logo featuring the national flag to honour the company’s rich heritage in British design, manufacturing and innovation.

2021 will also see the company launch two digital initiatives including its own podcast series to champion British design and resilience, along with inspirational new product ranges from its Stoke-on-Trent headquarters.

“We’re a product of strong and resourceful communities. Both in The Potteries’ heartland that we’re proud to call home and the British design industry that we proudly serve. So, rather than looking back, we wanted to take this opportunity to revel in where we’re heading because of the extraordinary resourcefulness of all our people – colleagues, customers and suppliers alike.

“It’s especially fitting given that, never, in living memory, have we been called upon to consider ‘resource’ more deeply. The initiatives that we have underway will allow us to celebrate this milestone by honouring and learning from those who have demonstrated true resourcefulness time and again.”

Johnson Tiles’ track record is testament to the fact that the business has never stood still. Since 1901, the company has used acquisitions and investments to grow, eventually establishing its own design resource studio, Material Lab, in 2006. Johnson Tiles also pioneered the use of inkjet technology in 2008 to produce the first photo-realistic patterns on tiles.

In recent history it has transformed a traditional manufacturing set-up into a more sustainable operation – in every which way. The foresight to start this journey two decades ago is why the company has survived and thrived against a challenging backdrop. Not least the unprecedented scenario that has played out over the last 12 months.

The subtle introduction of the national flag to the logo is reflective of the British resourcefulness that has seen Johnson Tiles make it to 120 years and will ensure the company continues manufacturing for many more generations to come.