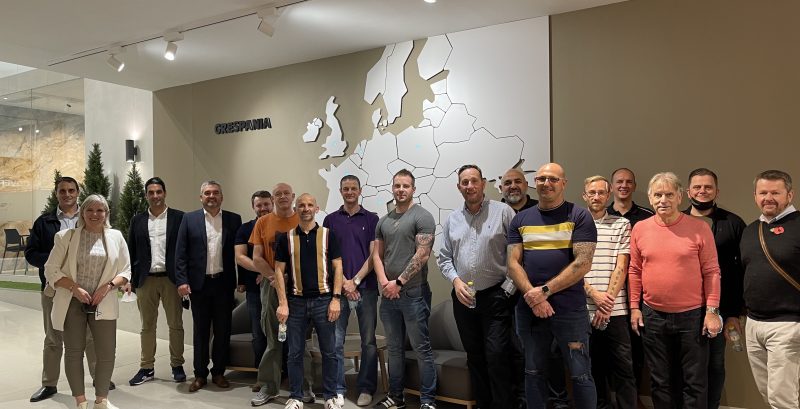 The UK group was organised by TTA, but the visit, including flights, accommodation and most meals, was fully funded by the Spanish hosts, for which TTA is very grateful.

The UK is the world’s third largest export market for the Spanish tile producers. The TTA group was invited to the country’s most important tile producing region to learn about the new generation of large format tiles, and they heard presentations from a number of leading manufacturers during the trip, and had the opportunity for some hands-on experience as well. Large format tiles and panels, although accounting for a small segment of the UK market currently, are now growing very rapidly in terms of market penetration.

As Adrian O’Clements from A&L Tiling Contractors, who was on the trip, said: “Understanding how the tiles are made, and knowing the structure of them, will help greatly when installing them.”

The TTA group comprised mainly tile installers, retailers and distributors and the Spanish hosts put on a highly informative programme of activities for their benefit. The visitors enjoyed a number of visits to factories and showrooms belonging to some of the major players in the large format tile sector in the Castellón area, such as Grespania and Idylium.

The programme also included a day of training, which was delivered by Proalso, the Spanish Tile Installers Association. The TTA guests found this particularly useful, as it helped answer many of the queries that they had regarding the applicability and installation of large format tiles.

As well as a great learning opportunity for the TTA group, the visit further strengthened the relationship that TTA now has with ASCER. These relations are already highly productive, following the marketing collaboration started last year between the two associations.

On the third day of the Castellón trip, the TTA delegation, which included Paul Luff, Chairman, and Kay Porter, Chief Executive, made a full presentation to the hosts on the work of the TTA and the UK market, including the important issue of product marking and the new UKCA mark, which is a key concern for all foreign manufacturers hoping to place products on the UK market post-Brexit.

The TTA visit did not go unnoticed by the local media and was featured on the local Castellón television news. The clip can be viewed on TTA’s Facebook page.

“We were delighted by the great welcome we enjoyed from everyone we met during this visit,” said Paul Luff. “The hospitality was great, the information we received was first class and I know it was very useful for the fixers in the group. I would like to thank ASCER and the Castellón Chamber of Commerce for inviting us – we hope to reciprocate very soon and we look forward to developing our relationship with ASCER and the wider Spanish industry going forward.”

« Previous post « BANKS & LLOYD, N&C, PALACE CHEMICALS LTD AND ULTRATILE ARE THE LATEST GOLD SPONSORS OF TTA AWARDS 2022
Next post »MOST LISTENED TO ARTISTS AND SONGS BY TRADESPEOPLE »