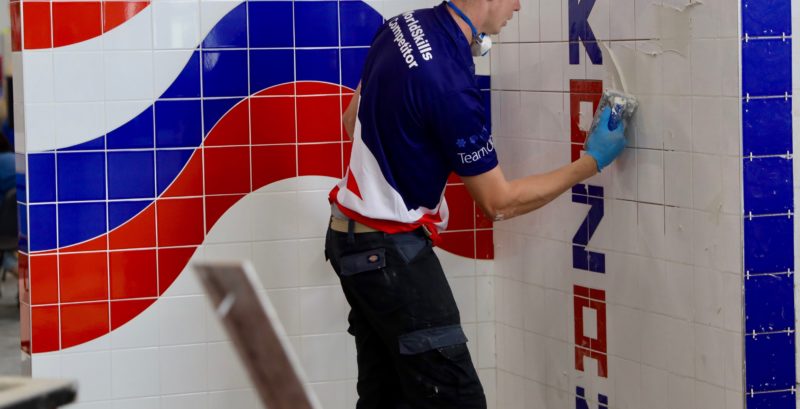 Mark Scott, a young tiler from near Glasgow, has been ranked 7th in the World out of 25 countries and awarded a Medallion of Excellence at the WorldSkills final in Kazan. Countries that he beat include Chinese Taipei, Hong Kong, Netherlands, Sweden, Malaysia and Columbia.

The medal he received can only be awarded to those who reach the skill specific benchmark set by WorldSkills at an international level. At the event only nine competitors achieved the benchmark. This puts UK skill firmly back where it should be – ranked one of the best in the World and WorldSkills UK is very proud of this achievement. It has only been possible due to the collaboration between WorldSkills UK, wall and floor tiling industry leaders, vocational trainers and CITB.

Paul Doran of WorldSkills UK says: “On behalf of myself and Mark Scott, we would like to thank TTA for being a part of the collective aim of driving up the standards of skills in the UK and linking with international best practice across the world.”

Mark’s success was part of a wider success for Team UK at WorldSkills this year, which saw the national team bring home two Gold, one Silver and one Bronze medal, in addition to 15 medallions of excellence. RUBI Tools provided Mark with the tools and equipment needed to train and compete at WorldSkills.

The next event in the calendar is WorldSkills UK LIVE 2019, which takes place from 21 – 23 November at the NEC.