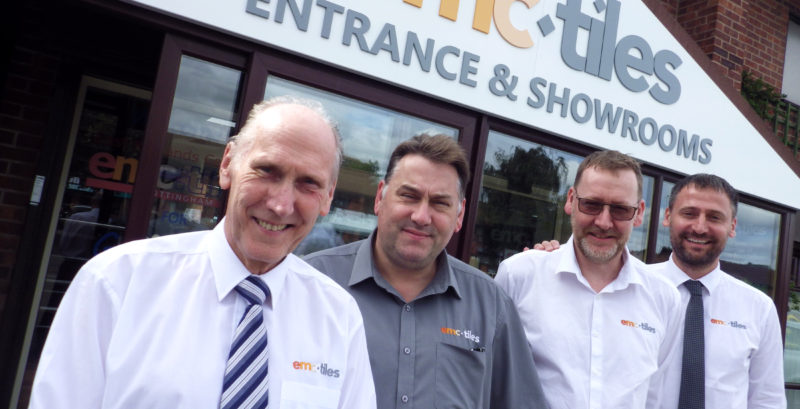 Barry Slawson, Managing Director and founder of Nottingham-based East Midlands Ceramics (EMC Tiles), is celebrating forty years in business with a new role as Group Company Chairman – and the appointment of three sons as directors.

This creates a pathway for a new management structure to take the helm at an exciting time for the company, which now has outlets in Nottingham, Leicester, Loughborough and newly acquired Derby.

The family firm will see three of Barry’s sons, Philip, Martyn and Stephen, occupying key roles in buying, IT, sales and trade services. The trio, with many years’ experience within the tiling industry between them, have been developing these positions for some time and will now team-up as joint Managing Directors with continuing responsibility for their own sectors but also the day-to-day running of the company.

Barry, who founded the business with one small shop in Nottingham says: “Forty years in business is a real milestone for the company and I have decided to make it a personal milestone too, with a move to a chairman’s role.

“I believe the time is right and feel I can hand over the day-to-day running of our company in total confidence that we have the most able and experienced team to take us forward.”

From its small beginnings, forty years ago, EMC Tiles is now a major player in the UK commercial and domestic retailing market with several top national awards to its credit.

In 1989, the company relocated to its present headquarters at Southglade Business Park in Nottingham where it developed a 20,000 sq. ft. unit comprising showrooms, trade services, warehousing, administration and commercial services. A unit in Loughborough opened in 2000 and the company acquired a site in Leicester in 2014. In June this year a Derby branch opened, giving EMC Tiles a truly regional presence. The company currently has 53 employees.