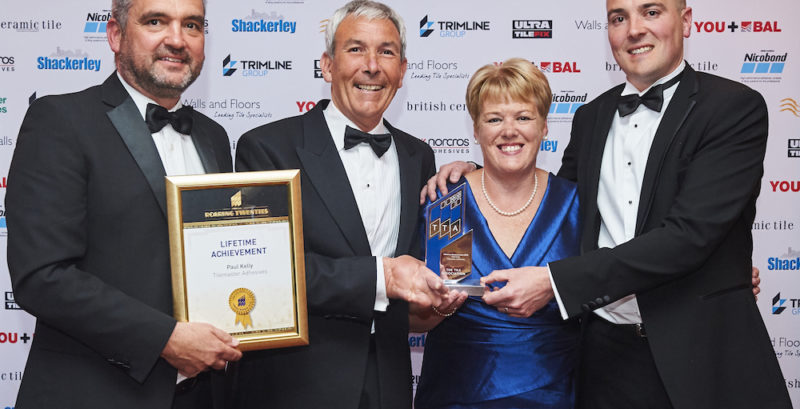 Paul Kelly, founder of Leyland company Tilemaster Adhesives, has been awarded a Lifetime Achievement Award in the TTA Awards.

This year the TTA is giving this prestigious award to Paul, not only because he built up a highly successful and well-regarded business, currently employing some 65 people, but also because of his extraordinary life story.

Paul started out in business 40 years ago when, as an entrepreneur, he ran a small scale manufacturing company. In 1990 he set up a manufacturing enterprise near his home in Whittle-le-Woods, near Chorley, manufacturing ready mixed wall tile adhesive.

During the following years, through hard work and commitment, he built this business up, manufacturing products and personally delivering them all over the northwest of England. By 2002 Paul was employing three people, and the business seemed to be on a steady growth trajectory.

However Paul’s life was about to take a dramatic turn, when he suffered an accident at work, which came within a whisker of killing him. In fact the paramedics said afterwards that he had technically died momentarily. On that fateful day in February 2002, Paul fell into a turning mixer blender in his factory. Fortunately a delivery driver was able to raise the alarm and, although he suffered severed limbs and digits, the paramedics managed to rescue them.

After 22 hours of non-stop surgery at Wythenshawe Hospital, a team of ten surgeons were able to reattach one severed hand, as well as the fingers of the other hand, apart from the thumb, which was lost. Undaunted, the medical team managed to graft the big toe from the severed foot on to the hand in place of a thumb.

Despite losing a leg, Paul was soon walking and back at work and even riding a bicycle. The sport of cycling became increasingly important to him – which was nearly his undoing and he had the misfortune to be involved in a second serious accident in 2006 – this time a collision with a truck while he was out on his bike. Since this accident involved head injuries, it had the potential to have an even greater impact than the factory accident. However Paul once again managed to make a full recovery.

Today he says his health is tip-top, he is an active fundraiser for charity and he is currently looking forward to a long and healthy retirement, starting later this year, having passed on the stewardship of the Tilemaster business to his son Mark. In fact, despite everything, Paul and Mark managed to keep Tilemaster on its growth track, and last year the business was acquired by Kerakoll, another a family-owned company.

Paul attended the TTA Awards with his son Mark and wife Rhona, who also works in the business. After the Awards, he said: “I am happy to have won this for everyone who works in the business. I just feel very lucky to be able to see the continuing success of Tilemaster, and its growth as a significant local employer, despite the two mishaps which have occurred in my life, which nearly derailed everything!”