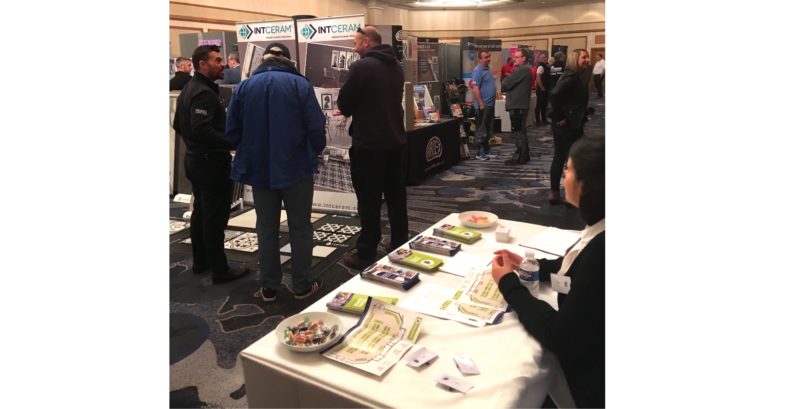 The Tiling Show, organised by The Tile Association, has firmly established itself as a must-attend event for our industry.

Taking place last Friday at The Hilton Birmingham Metropole, the Show attracted 32 exhibitors, growing strongly for its second year, and proved to be an essential day out for fixers, retailers and others from the tiling sector.

IntCeram were the main sponsor of the Show and also an exhibitor. They were joined by exhibitors from virtually every sector of the industry – tile manufacturers, distributors, agents, as well as manufacturers of tools, adhesives and chemicals.

As well as visiting the stands at the Show, visitors had the opportunity to attend a programme of product demonstrations and seminars which were held during the day. Demos and seminars were presented by: Mapei, Warmup, UltraTileFix, Jackoboard, Shackerley and TTA.

Feedback from those attending and visiting the Show was overwhelmingly positive.

As George Steele, Head of Warmup Pro, said: “The show was a great opportunity for Warmup to engage with new leads and introduce our new initiative (Warmup Pro) to key professionals within the industry.”

Martin Mallon of Armatile said: “We had a good visit to the Show and it was really good to catch up with everyone again.”

David Lyman, Sales and Marketing Director at BAL, said: “The Tiling Show was a fantastic event which showcased the best that the tiling industry has to offer. We were delighted to be able to attend and exhibit our latest products and innovations as well as seeing many faces – old and new.”

Meanwhile Mark Watson of STS said: “We’re new to the TTA, so it was really useful for us. It allowed us to understand the vibe of the industry. The energy was really on show, so you could see that the tiling industry is alive and well.”