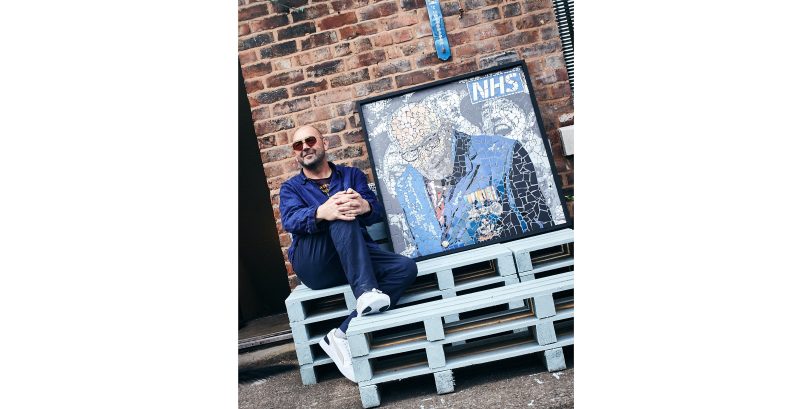 JACKOBOARD® has had a long association with Mark Kennedy and has supplied him with backerboard for his past projects, including many in the city of Manchester and around Manchester City’s football ground. The JACKOBOARD® product has been especially useful where water-sensitive backgrounds are important.

“I’ve known Mark Kennedy as a good friend for many years,” says Michael Hailwood, JACKOBOARD® Director. “He is amazingly creative and original, and it has been an absolute pleasure to be able to support his work over the years.”

Palace Chemicals also has a longstanding relationship with Mark and has supported him with products to make some of his most famous works. Recently the company commissioned him to create a special commemorative piece to celebrate the knighthood and achievements of Captain Sir Tom Moore, as well as all the key workers who have contributed to the UK’s national pandemic efforts.

Managing director at Palace Chemicals, Charles Clapham MBE, says: “We wanted to do something to acknowledge not only the work of Captain Sir Tom and his knighthood, but all key workers, including our fantastic team here who are doing their part to help keep our customers safe and to ensure continuity of supply.”

Mark Kennedy, who has previously created mosaics of Joe Hart, Sergio Aguero and Yaya Toure, said: “I was contacted by Palace Chemicals and asked to create this latest piece. Captain Tom is exemplifying the efforts by everyone helping us get through this. The artwork has been a labour of love and I worked tirelessly on it over 12-hour shifts. Our hope is that this helps to raise even more money for the heroes who have helped our entire national effort.”

The mosaic took over 84 man-hours and thousands of tiles to complete and has been donated by Palace Chemicals to the Captain Tom Foundation, which will be arranging a public exhibition for the artwork once the pandemic is over. The business hopes the piece can be sold or auctioned to generate even more money for the foundation’s good work.