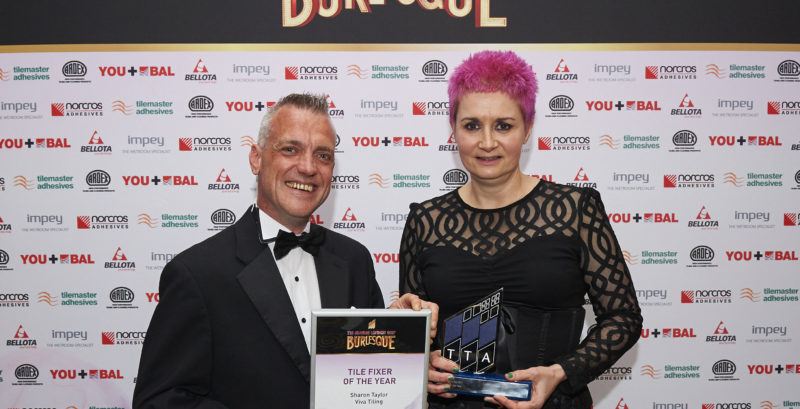 Sharon Taylor winning Tile Fixer of the Year was definitely one of the highlights of this year’s TTA Awards.

In taking the Award, she became the first-ever woman to be nominated for and to win this accolade. This category is always one of the most eagerly awaited on TTA Awards night, and it was keenly contested this year, with four superb fixers shortlisted – Andy Carroll, Dan Kyle and Nigel Davidson being the other worthy finalists. This was also one of the six categories of the Awards which were determined by public vote. So Sharon really was the industry’s choice.

Sharon’s story started ten years ago, when, following redundancy, she decided to retrain in wall and floor tiling, took a course with Specialist Trade Courses at Harlow, Essex, and started her own company Viva Tiling.

Sharon undertook further training in the UK and Italy, during which she became convinced she wanted to focus on the area of mosaics.

“It became obvious to specialise in mosaics and that is what I have been aiming towards achieving,” she says. “I have steadily developed a reputation for working on steam rooms, ice fountains, spa baths, curved seating and shower units, basically any surface that requires mosaics. I have worked on new spas in leisure centres, including the new Hilton Conference Hotel at Heathrow (T5), plus private domestic steam rooms around the UK, working with home owners, contractors and designers. I enjoy what I do, and I am always willing to take on the most intricate and difficult projects, as I relish any new challenge.”

Sharon is clearly thrilled with her Award win and views this as a great accolade for the work that she has already carried out and as a boost for her business going forward. “This is definitely a career highlight,” she says, “and I would like to thank everybody who voted for me. I am delighted that I have been able to build up a good portfolio of work in my chosen area of mosaics. Winning Tile Fixer of the Year is the icing on the cake and I have no doubt that this will be enormously beneficial to the development of my business going forward. I would urge any other fixers out there who are proud of their work to consider entering Tile Fixer of the Year in 2018!”